When the Promo Is Better Than the Book 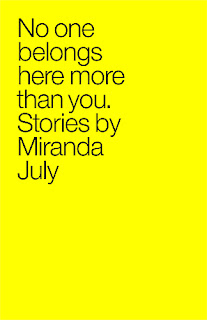 July's work often features characters who are "on the edge" and "on the edges" emotionally and psychologically. This was fine in her film, the odd and touching Me and You and Everyone We Know (which she wrote, directed and starred in), since we followed the same characters throughout. In No One Belongs Here More Than You, we encounter a panoply of similar characters over and over, but without the continuing story line, so that the stories become, at best, repetitive and unsettling and, at worst, annoying and creepy. July's trademark off-kilter humor is still here, which is a good thing.

Don't get me wrong; there are some fine stories here, but the cumulative weirdness and the characters' relentless air of longing nearly kept me from finishing the book. And that would have been a shame, since two of the better stories, "Birthmark" (my favorite) and "How to Tell Stories to Children," are the last two in the book.

Regardless of how I feel about the stories, I love July's web promotion for the book (note that there's one more click after the black screen). It's particularly July-esque (although I was disappointed to learn recently that July's real name is Miranda Grossinger).
Posted by Clara at 9:16 PM

Email ThisBlogThis!Share to TwitterShare to FacebookShare to Pinterest
Labels: book review, Miranda July, No One Belongs Here More Than You, reading

Thanks for the good review, BG. I admit that I was letting the book (yellow cover) languish on my porch after only the first stories. A friend had given me the video of "Me and You" and I found that I had too much Miranda July in my life. I'll definitely read the stories you recommend.

I see what you mean. I read the first few stories right when I got the book and stopped. So I think my solution is to break it up over time. I read another story a few weeks ago. Maybe it's about time for another...

RL and Alea, I think Alea quite right that the best approach to this book is to take small bites from it over time, rather than consume it all at once.