A Yen for Paper

I seem to be obsessed lately with advertising involving the clever use of paper. Maybe it's because interesting advertising is rare. But there's also a bit of nostalgia here, as paper becomes less and less important in society -- newspapers losing ground to reading online, books in print being overshadowed by ebooks, etc.

Paradoxically, paper has become even more important to me in the past few years. I've always been an avid reader of books, magazines, and newspapers (not to mention cereal boxes, catalogs, posters -- you get the idea), but now that I make books, I've developed a whole new and delicious appreciation for all kinds of paper. In some ways, then, I may be going backward instead of forward in time. In this case, I don't think it's a bad thing.

This is the trailer for Le Petit Nicolas, a live-action film based on the book of the same name. The book was first published in 1959, written by Rene Goscinny (who also wrote the Asterix comic books), and illustrated by Jean-Jacques Sempe. Followed by several more books about Nicholas and his friends, the books became wildly popular in France in the 60s.

Thanks to Celeste Frittata for the heads up on this video.

How about you? Do you, too, have a lust for paper?

Ads Don't Have to be Boring

I've written about Su Blackwell's work before, and it continues to amaze. Below is a 45-second t.v. advertisement for Beringer wines from 2007 that I learned about on All Things Paper (thanks, to Ann Martin).

Blackwell, a UK-based artist, combines arts (pop-ups) and paper-cutting in remarkable ways. Worth seeing is the "making-of video" for the Beringer ad (also below), which features Blackwell.

And just for fun, in case you missed it the first time 'round, is a charming video from singer-songwriter Lisa Hannigan's CD, Sea Sew, which I wrote about here.

Stop-motion video seems to be encouraging advertisers to do more with paper arts (hurray!). Have you seen any examples recently that we may have missed?
Posted by Clara at 12:15 PM 9 comments:

How Do You Feel About the Printed Word? 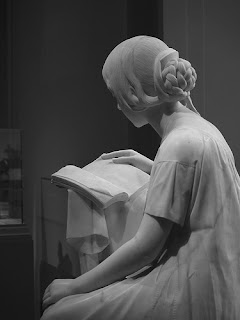 I have a new widget -- I Pledge to Read the Printed Word -- on this blog (see left) that I found while reading one of the (too many) blogs I follow on my feed reader.

I embrace technology, particularly the extraordinary access to data and knowledge that it provides through the Web -- no, I'm not forgetting the also extraordinary levels of useless detritus, but for me, the pros far outweigh the cons. I also appreciate the value of a Kindle when traveling -- I wish I'd had one when I seemed to live on a plane during a past work life.

So I'm certainly no Luddite. Nevertheless, the printed page is to me one of the true wonders of the world, and I'll be forever in debt to Herr Gutenberg. Curling up with the Sunday Times or the book I'm currently reading (you MUST read this) is one of my great pleasures. Curling up with a Kindle? Not so much.

When I came across this wonderful "manifesto" from Mrs. Fischer's English Classes, I had to share it:

I, hereby, pledge to read the printed word. I pledge to hold books in my hand, to visit public libraries, to flip tangible pages, to read for pleasure and imagination, to pause from my reading to tilt my head heavenward to consider what information I have just absorbed.

I couldn't have said it better.

What do you think of "Mrs. Fischer's" pledge? Any thoughts on electronic readers such as the Kindle?

Email ThisBlogThis!Share to TwitterShare to FacebookShare to Pinterest
Labels: reading, reading experience
Newer Posts Older Posts Home
Subscribe to: Posts (Atom)
Please do not use or reproduce text or any original images from this blog without my consent.