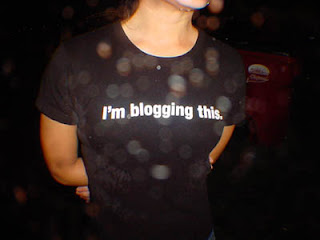 My husband is a journalist. He's constantly on deadline and is tremendously productive (no, that's not him in the photo ;-) ). Hearing him talk about his work has given me a new appreciation for the people who help writers do their best work. A good editor is one of those. Recently, Salon ran a piece by Gary Kamiya, "Let Us Now Praise Editors," about the value that a good editor brings to the writing process and to the end product. Here's Kamiya on editors and writing for the Web:

"In the brave new world of self-publishing, editors are an endangered species. This isn't all bad. It's good that anyone who wants to publish and has access to a computer now faces no barriers. And some bloggers don't really need editors: Their prose is fluent and conversational, and readers have no expectation that the work is going to be elegant or beautifully shaped. Its main function is to communicate clearly. It isn't intended to last.

"Still, editors and editing will be more important than ever as the Internet age rockets forward. The online world is not just about millions of newborn writers exulting in their powers. It's also about millions of readers who need to sort through this endless universe and figure out which writers are worth reading. Who is going to sort out the exceptional ones? Editors, of some type. Some smart group of people is going to have to separate the wheat from the chaff. And the more refined that separation process is, the more talent -- and perhaps more training -- will be required.

"...We already use other readers to sort things out for us: My bookmarks are mostly referrals from writers I've learned to trust. Some utopians may dream that an anarcho-Wikipedia model will prevail, that a vast self-correcting democracy of amateurs will end up pointing readers to the most worthwhile pieces. But that is only "editing" in its crudest, most general form -- it's really sorting...The real problem is glut, and it's only going to get worse."

Of course, Kamiya is writing about people who write or who want to write for a wider audience, not for those of us who are writing simply for entertainment or to share our thoughts, interests and ideas with others who think as we do or share our interests. And as someone who spends a fair amount of time reading on the Net, and who cares about good writing, partly because it makes my reading experience better, what he has to say interests me.

This got me thinking about my own writing and how it's changed or not now that I've been blogging for some months. Although you may find it hard to believe, BookGirl tends to be a tiny bit verbose from time to time ("no! Really?!" you say, incredulous). I've written a lot over the course of my professional life, and I've been told that I do it well. But it's also fair to say that my better writing has come from many rounds of self-editing, which end only when I've run out of time and need to turn in whatever it is I'm working on.

Now that I'm blogging, I've become even more aware of the importance of editing myself, although the process and purpose of blogging doesn't really support that. For "amateur" bloggers (like me) blogging often connotes "journal" or "diary" and, as such, some bloggers adopt a stream-of-consciousness style, or take a rambling approach to their topic (if, in fact, there is one -- and I don't mean that pejoratively).

One of my Achilles' heels as a writer (I guess I can only have two ;-)) is that I have a tendency to want to include all kinds of related information. These are usually asides that I think are interesting, or amusing, or expressive, but that, at the end of the day (like the phrase "at the end of the day" in this sentence), are extraneous. Nevertheless, my blog is not the place to rid myself of all of the eccentricities in my writing. These "irregularities" are what makes blogging a particularly intimate form; they're what let you see the person behind the blog. In many ways, that's what amateur blogging is about. It invites us to share ourselves, (writing) warts and all. Some might call it style.

As to what I look for when I read blogs? Well, while some of us enjoy the looser, rambling style that takes us down the side roads of someone's thoughts or days, there are those of us (mea culpa) who prefer a more direct approach. This isn't to say that I don't enjoy reflection, or thoughtful discussion. Just the opposite. It's just that I'm more likely to bookmark blogs that have something to say (that interests me) and that don't take a long time saying it.

Naturally, there are always exceptions. Sometimes a voice is so individual, so expressive, that I toss other criteria to the winds (and, anyway, it's not like I'm sitting around checking boxes on a list while I'm reading). And sometimes I read blogs because I end up liking the people who write them -- whether I know them or not -- and I like to know what's going on in their lives; sometimes I feel a kinship with someone's writing (don't ask me to explain it. Like that definition of pornography, I know it when I see it). That's great too.

The good news, of course, is that just about every blog out there speaks to someone, and as such, that "someone" becomes part of a community of other "someones" whom they never may have known existed otherwise, which is a pretty cool thing.
Posted by Clara at 10:01 AM

Clarity and brevity. A professor once told me that was the key to writing. I have been a student of those two words ever since. That's what makes a blog readable for me.

Clara, I have been contacted by a student who is doing some research about the state of 'tactile arts' in our world today. She has a short email-interview that she would like to have completed by a number of people and asked if I knew anyone else who might do it. Perhaps you would like to participate? I could pass along your blog address to her?

Yep. Strunk & White remains one of my writing bibles. And, sure, I'd be glad to participate in the email interview. Please feel free to give her my blog address.

S&W, yes, it is always within reach.

Oooh, BG, I so want to join this discussion!!! I'll have to save it for next week when I rejoin my normal life (aka after kids are home).
BTW, have you seen the illustrated S&W that Maira Kalman did?

RL, enjoy the kidlets while you can! I do think these are interesting things to think about, 'though. After all, blogging is in its infancy, so it can be anything we want it to be.

And yes, I got Maira Kalman's illustrated S&W soon after it came out. I love her stuff anyway, so it was a no-brainer.

Strunk and White? Really? The book is something of an inspiring read, to see such passion for words, but their advice....

Richard, for my money, S&W is in many ways a better guide to grammar and clear, readable writing than the kind of texts I used in collage (or that I used when I taught freshman-English classes). Which guides do you favor?

S&W is very readable, true, but the intensity of their opinions and their passion for language obscures the fact that some of their rules are almost crazy.

Having said that, I'm constantly looking for alternatives, because so many handbooks just aren't readable. S&W stands above them in terms of its own style, even though its instructional quality isn't as good. I'm actually thinking of using it again in the next year or two, though, with a pack of objections against it from various places (the review I linked to in my last, for example, and some of the posts in Language Log), because I haven't seen a more readable intro.

I really like Joseph Williams' Style: Ten Lessons in Clarity and Grace (I'm in Canada, so I use the Canadian version with the same title co-written with Ira Nadel), and I've used it successfully in advanced comp classes, but it's too complex for first-year courses.

You've piqued my curiosity, Richard, so I'll have to take a look at S&W again, but I can't promise anything.

Thanks for lead on Language Log and the book by Williams.

Language Log is terrific stuff that every word-person needs to read regularly. Funny and opinionated pieces by some of America's most accomplished linguists, including one of the authors of the new Cambridge Grammar of the English Language.