The Internet Is Not The Problem 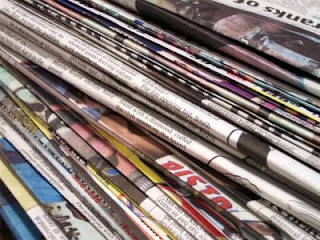 Because I've become concerned about the continuing loss of arts -- in particular, book -- coverage in metropolitan newspapers, I've been reading more about the management of newspapers. This is a topic I knew -- and still know -- little about, and it's proving to be an enlightening education. In a review very much worth reading in The New York Review of Books, Russell Baker takes a look of the state of journalism today. Discussing The New York Times, The Washington Post, and The Wall Street Journal (the WSJ's owners, the Bancroft family, has put the paper up for sale. See here, here and here for the ongoing story), Baker writes:

"Family control has sheltered all three newspapers from Wall Street's most insistent demands, allowing them to do high-quality—and high cost— journalism. It was said, and widely believed, that the controlling families were animated by a high-minded sense that their papers were quasi-public institutions. Of course profit was essential to their survival, but it was not the primary purpose of their existence. That one of these families might finally take the money and clear out heightens fears that no newspaper is so valuable to the republic that it cannot be knocked down at market for a nice price. Murdoch at the Journal is a dark omen for journalists everywhere. When the sign in the shop window says "Everything For Sale," it is often followed by 'Going Out Of Business.'

and of the results when the stock market bubble burst in the early 2000's, he says:

Journalism was being whittled away by a Wall Street theory that profits can be maximized by minimizing the product. Papers everywhere felt relentless demands for improved stock performance. The resulting policy of slash-and-burn cost-cutting has left the landscape littered with frail, failing, or gravely wounded newspapers which are increasingly useless to any reader who cares about what is happening in the world, the country, and the local community. Cost-cutting has reduced the number of correspondents stationed abroad, shriveled or closed news bureaus in Washington, and crippled local reporting staffs which once kept an eye on governors, mayors, state legislatures, small-town rascals, crooks, and jury suborners. It has also shrunk the size of the typical newspaper page, cutting the cost of newsprint by cutting news content.

Baker gives little credence to the argument that the Internet is the great enemy of print publishing, suggesting, in fact, that it should make for better journalism. He puts the blame squarely on corporate management, who has moved newspapers' responsibility away from its publics and to its shareholders.

"...So the next time a newspaper announces [that] it's trimming or killing book reviews, remember: It's not because of New Media, it's not rising illiteracy, it's not from any purported loss in advertising from the publishing industry. The cutback is the direct result of management decisions on what to value, which readers to sacrifice, how to please Wall Street."

Finally, on a more humorous, but not unrelated note, here's the beginning of Leonard Pitt's recent column, "No Escape in the Era of Viral Knowledge," retitled "Harry Potter Hype is Impossible to Ignore" for my local paper. Pitts is a Pulitzer Prize-winning columnist for The Miami Herald, which was my local paper for quite a while, and considered one of the best newspapers in the country. The Knight family sold the paper last year, and Pitts makes a not-so-subtle allusion to what may be going on as a result (besides the fact that the first item in the online banner-below-the banner today is "Holy Cow: bovine loose in Miami Lakes"):

"Harry Potter dies in the new book. It's tragic, really. Accidental cauldron explosion. Eye of newt and wing of bat everywhere. He gets impaled by a flying dragon snout. His last word is: 'Rosebud.'

"OK, I made that up. Please stop shrieking now. And for heaven's sake, don't cancel your subscription. We only have 17 subscribers left, and there's a rumor that if we lose one more, it'll be the end of free soap in the lavatories."

If you want to find out what's been happening to book coverage of late, and how you can help stem the tide, check out the National Book Critics Circle's Campaign to Save Book Reviews here.
Posted by Clara at 8:47 AM

Hi BG,
I haven't read Russell's entire review yet, but I have some experience with the issue in public radio. Corporations have been steadily buying up radio signals over the years for dizzying amounts of money. Colleges that have had public radio stations on their campuses that don't do too much (besides APHC and CarTalk) have been able to sell them for millions of unexpected dollars which they can use for their endowments...and hopefully their students. My own former station (often referred to as a "Kling-dom," a pun on the president's name) has built the largest regional and second largest national service in the country by diversifying its income, building an entrepreneurial culture and capitalizing on opportunities. Some would say that it has lost its public service mission and I would agree that it's entirely different than it was 20 years ago. Public radio is certainly more homogenized than it used to be but it also sounds better for it and members seem to appreciate that.
Before the large Kroc gift to NPR (please note that the money went to National Public Radio and NOT the local stations), their reporters had to share rooms with producers, use ancient equipment and suffer salaries that were half of what they could earn elsewhere. Newsgathering is an expensive business. It's built on nothing but people and a way to cut costs is to cut back coverage and use less talent.
For Russell to claim that the Internet is not the problem is ridiculous. It might not be the entire problem but it certainly has accounted for the cancellation of my newspaper subscription. There are even Sundays now when I don't buy the NYT paper. With subscribers dropping, costs must be cut, unless....
I still believe that we're looking for a new model for the 21st century...one that hasn't entirely shown up yet. And if the internet is part of the problem for newspapers, it's most certainly part of the solution for the future.

RL, it's good to hear from someone who has had analogous experiences. Media and its responsibility to the public is a more complicated issue than many of us think, whatever our initial perspective. I'm learning more every day, which seems the only good outcome of the loss of arts coverage that initially interested me.

A major difficulty in discussing this issue is getting to a definition of what a newspaper is supposed to do. Is it purely a for-profit venture whose first responsibility is to its shareholders and how it deals with its public only a means to that end? The capitalist business model would seem so say so. Or is there a more basic responsibility that overrides this?

In a way, our health care system is facing a similar problem. Is there a core responsibility to the patient that should override ensuring that health care is run as efficiently and profitably as possible for the shareholders of the pharmaceutical companies and the HMOs?

No easy answers from BookGirl.