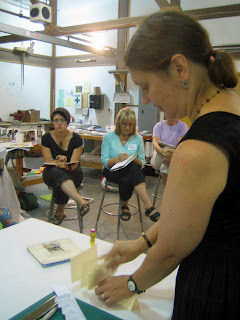 My class at Arrowmont with Carol Barton (at right) was on pop-up structures and movable books (the larger category of which pop-ups are a part). We spent a portion of each day on pop-ups; the rest on books. Some in our class seemed to have a natural talent for the former and created some fairly elaborate scenes. I was satisfied to learn the mechanics and spent more time on book structures. I'm reminded of something Dan Essig, in the class I took with him last recently, said about his and his brother's different talents. As kids, his brother (now a historian) did well on tests that involved reading and comprehension; Dan (now a book artist) did well on tests that involved objects revolving in space. Pop-ups, I think, benefit from a mind that's good at visualizing objects revolving in space.

The pop-ups were great fun, and some of them were surprisingly simple. The great talent, of course, is in combining the various techniques to create the type of work that we see in sophisticated commercial pop-up books -- for example, Robert Sabuda's Alice in Wonderland.

As to books, we worked on four book structures during the week: an accordion book, a blizzard book (developed and so named by Hedi Kyle), a carousel book, and a tunnel book. For all but the blizzard book, where the content is pretty much the structure itself, we were expected to develop our own content, and most of us spent our evening work-hours on that.

I've mentioned before that Carol is a very good teacher, and she did a great job of putting the work we were doing in context. Before she presented each of the book structures -- the blizzard book excepted -- we viewed a slide show containing examples of that particular form, created by a variety of artists. Carol has done a good deal of research on early examples of movable books, so the presentations were both inspirational and good history lessons.

Most of us didn't complete the tunnel book, which was our last project, since the carousel book took longer than we expected. But many of us were able to develop a prototype for the book, which helped us work out the issues raised by tunnel book construction. It was a very full week. 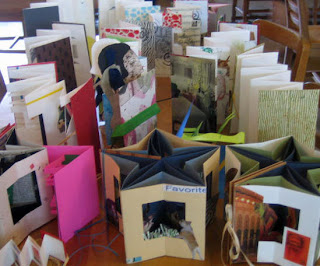 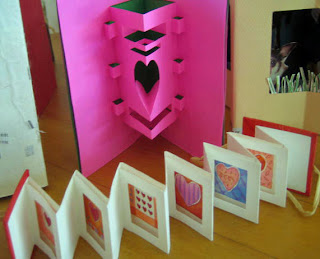 Pop-up and small accordion book by Sandy C., one of the students in our class 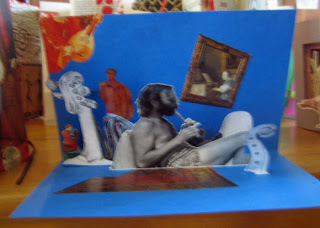 Pop-up by another student. The photo doesn't do a good job of capturing the dimension. 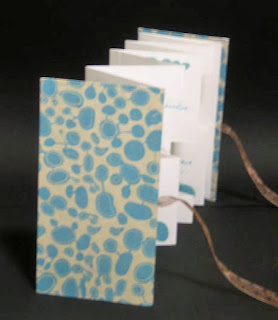 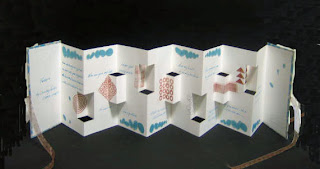 A not-particularly-good photo of the same accordion book, which includes a poem by Dorothy Parker. 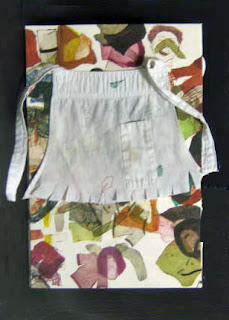 The cover of the whimsical accordion book by a student, an Arrowmont work-study artist 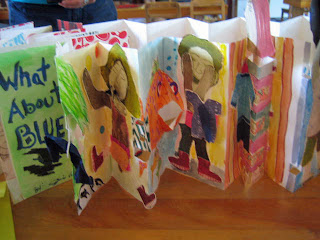 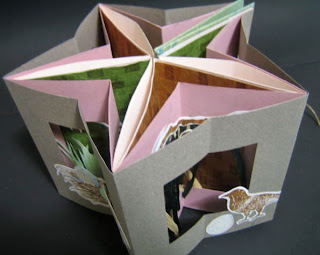 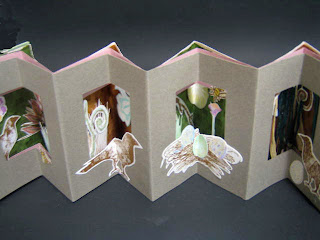 Another view of the book 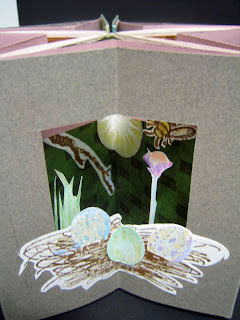 A detail of one of the 5 panels 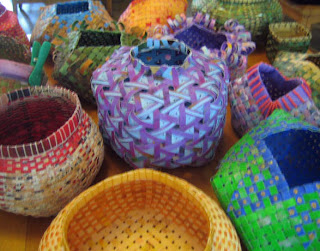 Baskets from the paper basketry students 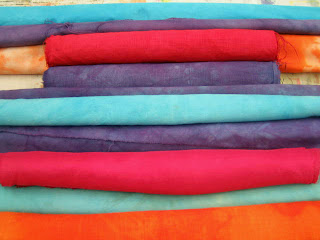 Cloth in the Text & Textiles class 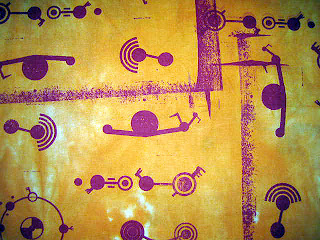 One of the works in progress
Posted by Clara at 7:45 PM

I love your carousel book and its natural theme...

Thanks for sharing these photos and stories!

BG, I think you accomplished a lot in a week. These structures take awhile to sink into the brain and come up with content that's appropriate for them. I love your nesting book and the accordion "Patterns." Thanks for sharing everything!

This looks like such a great experience and some beautiful stuff was made. I love both your carousel book and the crop circle fabric! This has made me think about going to Arrowmont next year.

Thanks so much for posting about it.

Thanks, all. It was a terrific experience, and making these structures taught me a lot.

BG, I meant to add, that when we revisited carousel book with Julie Chen last year, we used magnetic sheeting under the fabric of the front and back covers. Then when we opened the book into a full circle, they "stuck" together on their own. V. cool!

These are all wonderful! I love making little books, but haven't done anything complicated like some of these.

Couldn't find an email, thought I'd answer your question here. In the 'emulsion transfer' the beauty of it is that you don't have to rub off the paper (though the water has paper rubbings in it, as I get impatient). Once you get the emulsion started peeling at the corner, the whole translucent thing comes off, leaving just a plastic-y surface behind (that's also in one of the pix).

Thanks for visiting and commenting!