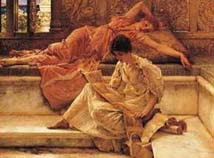 "A couple of years ago, British author Ian McEwan conducted an admittedly unscientific experiment. He and his son waded into the lunch-time crowds at a London park and began handing out free books. Within a few minutes, they had given away 30 novels.

"Nearly all of the takers were women, who were 'eager and grateful' for the freebies while the men 'frowned in suspicion, or distaste.' The inevitable conclusion, wrote McEwan in The Guardian newspaper: 'When women stop reading, the novel will be dead.'"

So begins Eric Weiner's story on NPR: Why Women Read More Than Men. This "fiction gender gap" is no news to booksellers, who point out that women customers head straight for the fiction section, and men to the nonfiction. And surveys conducted in the U.S., Canada and the UK say that men account for only 20% of the fiction market.

Why? One of the more recent theories focuses on "mirror neurons" and cognitive scientists' observations that women are more empathetic than men:

"Located behind the eyebrows, these neurons are activated both when we initiate actions and when we watch those same actions in others. Mirror neurons explain why we recoil when seeing others in pain, or salivate when we see other people eating a gourmet meal. Neuroscientists believe that mirror neurons hold the biological key to empathy."

It turns out that women have more sensitive mirror neurons than men. That might explain why fiction, which requires readers to emphasize with characters, appeals more to women.

"'Reading, requires incredible patience, and the ability to 'feel into' the characters. That is something women are both more interested in and also better at than men,'" says Louann Brizendine, author of The Female Brain."

Any men out there disagree?

Thanks to Book/Daddy for the lead.

Hm. I wonder ... when it is mostly women reading novels, why is it mostly men writing these novels?

From this angle, the mirror neurons theorie seems a bit far fetched. It would seem illogical to me when novel writers have less social abilities than novelreaders .... or is it just my female logic that lets me see it that way? ;-)

You raise an interesting point, tulibri. Are there more male fiction writers than females these days? I just took a look at the New York Times Hardcover Fiction best seller list (granted, this is hardly a scientific survey, nor, I expect, the best source for researching the issue), but just for the heck of it I counted the book written by females and those written by males. Of the 15 on the list, 7 are by women and 8 by men. On the Paperback Fiction list, 7 of the 16 are by women (with one of those having male and female co-authors). So while these two lists show more men than women writing books (or, rather, writing best sellers), it's not by much. I wonder how the numbers would shape up if we were looking at the total universe of books published in a year. I haven't a clue.

I'd venture to say, were the statistics to show that many more men are writing fiction than women (although I'm unconvinced, since my sense is that publishing these days is a pretty egalitarian business -- i.e., money is the bottom line, and that supersedes gender -- that this wouldn't be the first time in history that women were the primary consumers of "products" created by men.

By the way, I was surprised to see, relative to the "mirror neurons" theory, that 6 of the 16 books on the Hardcover Non-Fiction list were written by men, (two of these have male co-authors).

Thanks for getting the conversation going.