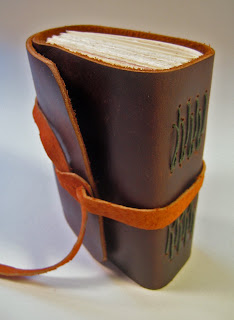 My few-and-far-between posts for Dan Essig's Book-a-Day class at BookWorks have become more like a book-a-month. But if not timely, I'm nevertheless tenacious, so here's the fifth and final installment in the series (scroll down -- skipping the X-Files post -- to see the rest). Our fifth book had us working with leather and another long-stitch binding. The stitch is surprisingly simple;the trick is getting started, since it's not an intuitive beginning. Dan demonstrated several closures, and I chose one of the simplest: one end of a long leather strip (trimmed to a point at one end, and wider at the opposite end) goes in through a slit in the fold-over cover, approximately three-quarters-of-an inch from the edge; comes out the cover via another slit approximately one-quarter-of-an-inch from the edge. Make a hole with a Japanese hole punch at the other, wider, end of the strip, through which you'll slip the end of the strip that's emerged from the slit in the book. Presto! You can now wrap the strip around your book and slip the pointed end through the space between the book and the wider end of the strip. Simple but effective.

I love this fat little book (approximately 3 1/2" x 4 1/8" closed). It's a perfect keep-in-your-bag journal. Here are a few photos of the book, and some additional treats: 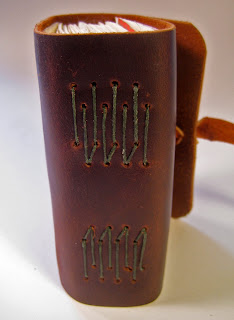 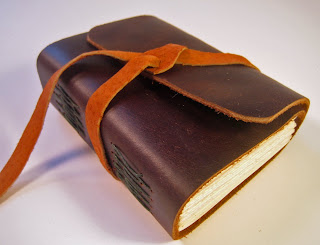 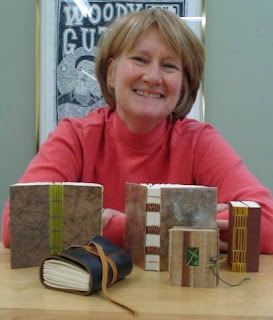 My friend Priscilla and her collection 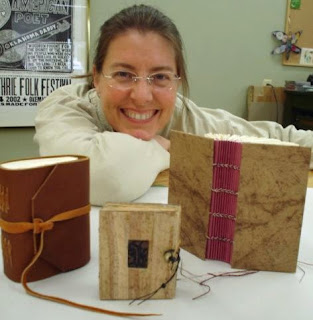 Lisa and three of her books 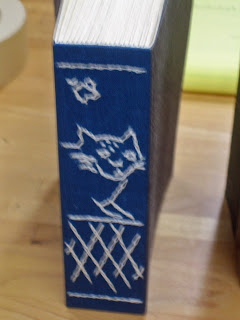 A long-stitch book from Dan's collection that he bought from a student in Boston. Every stitch is functional, not just decorative! 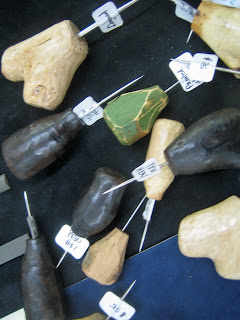 Some of the wonderful awls that Dan makes and sells.
Posted by Clara at 9:25 AM

I have never tried anything like this, but it looks fabulous. You must be very proud of yourself

Nice to see you on the blogs again, BG! See you soon in person!
xx

hey, i really enjoy reading your blog, especially the recent posts with the book pictures. i'm curious if you have any book-making book recommendations. i have used only one book extensively: Cover to Cover by Shereen LaPlantz. however, in the past year i feel like my skills have plateaued and i want to learn some of the techniques you have posted about here. do you have any good, self-guided book recommendations?

thanks so much,
quin

Miss 376, thank for your kind comments. Yes, I'm pleased with the work I'm doing but, more often than not, I'm thinking about all the things I could have done better. Sigh.

MadSilence, thanks, and good to hear from you.

Quin, I'm glad you've enjoyed the blog. As to suggestions for books, I suppose it all depends on the types of books you want to make. For sewn bindings, it's hard to top Keith Smith's books, although the consensus seems to be that they're a bit difficult to work through. For a mix of bindings, I've enjoyed the books by Alissa Golden (there are 4) Ben Rinehart and Gabrielle Fox. And the Penland Book of Handmade Books is also quite wonderful. Good luck!

Worth the wait, to see more of your books. Now I want one of Dan's awls - I just love the handles. Did you buy one? I'm tempted to email him and ask about buying one... You must have the most wonderful set of books now that you made at that workshop - I'm trying not to be envious. I've just remembered, I'm 2 months behind with my blog (been away) but when I last posted I mentioned you and Dan's books.