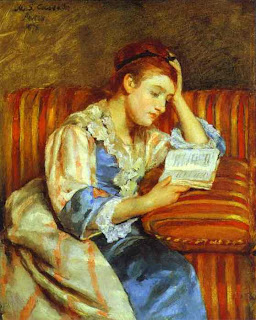 Here's the list of the books I read in 2007. I've been keeping reading lists for as long as I can remember. I'm not quite sure why, other than to stay focused on reading, and to refer to when someone asks me for a recommendation. But it's also a good way to look back with a bit of distance to see which books left an impression, and which I might have done without.

It's a reminder, too, of the truth of the "so many books, so little time" adage. And that, even among those books I was able to read, so few left a significant mark -- books that I remember months later and still get excited about.

Some of these include Patricia Hampl's Blue Arabesque, a quiet, meditative book about art and artists (this was the first book I'd read by her and it won't be the last); The Mystery Guest, an odd little book (by Gregoire Bouillier) about....well, about the narrator's former romantic relationship, a bottle of wine, a party, and his role as the party's "mystery guest." It's much more, and perhaps much less, than that. I liked it a lot. Truth and Beauty, by Ann Patchett, is about her relationship with her close friend, the writer Lucy Grealy (see Autobiography of a Face). Patchett is a wonderful writer, and her description of her friendship with Grealy is alternately fascinating and infuriating, but always heartfelt and honest.

I'd never read Sharon McCrumb, but found The Ballad of Frankie Silver strangely affecting, perhaps because the setting is the mountain towns of North Carolina, where I live. The novel is based on the true story of the first woman executed (for murder) in the state. McCrumb is a terrific story-teller. Another favorite was Charles Baxter's The Feast of Love. I'd been hearing about this novel for years, but got around to reading it only recently. It's full of characters you want to know more about, and permeated throughout with a feeling of magic. It made me want to know Charles Baxter better, too. I enjoyed Balzac and the Little Chinese Princess, by Dai Sijie, a lovely story of two Chinese boys who are sent to work in a rural area of China during the Cultural Revolution. And I liked Elizabeth Gilbert's Eat, Pray, Love. It was only after I finished the book that I remembered having read a novel of hers on a lark a couple of years ago, Stern Men, only a little about lobster men in Maine, that I'd much enjoyed.

Of the books I re-read, I fell in love again with E.M. Forster's Howard's End and My Antonia by Willa Cather. I admit that it was hard to read Howard's End this time without seeing Emma Thompson as Margaret Schlegel (Emma played Margaret in the film based on the book). No doubt that added to my enjoyment, but on its own it's a beautifully layered book. My Antonia was a lyrical journey. I don't remember being very excited about it the first time I read it (come to think of it, that was probably in high school or college). I'm convinced that a major part of the reading experience is the reader's readiness. They say that timing is everything, and it certainly applies to reading. Which is why re-reading, years after you first read a book, can yield such great rewards.

What did I not like? Well, perhaps the worst books are those that I think of as the equivalent of Chinese food: moments after you've finished them, you've forgotten them and are hungry for a real book. Usually, though, all's well while you're reading. To extend the metaphor, they're a little like comfort food. As to what I plodded through, The Mists of Avalon, by Marion Zimmer Bradley, a book I read for a book club, and My Name is Red, another book club read, top my list. They're very different books of course, and Orhan Pamuk received the Nobel Prize for his body of work recently. I found My Name is Red to be terribly repetitive, as if Pamuk wanted to make sure that the reader GOT THE POINT. The Mists of Avalon, which I understand is a huge favorite of many and a cult book of sorts, was also repetitive (and very, very, very long). But more than that, it wasn't much fun, and a book about the Arthurian legend (told from a feminine -- and feminist -- perspective) should be fun. Instead, it was preachy and pretentious.

I'm already into my reading for 2008 and looking forward to great new finds and some classic favorites. Happy reading in 2008!

My 2007 Reading
Artist Credit: Woman Reading, by Mary Cassatt, top right
Posted by Clara at 10:01 AM

BG, your list is a bit overwhelming but very impressive! I sat next to Charles Baxter (he lives here) at a house concert once...a lovely guy. I haven't read his books, but I just put an order in now at the library. Thanks for the recommendations!

You sat next to Charles Baxter! I'm envious, RL. I'm such an author groupie.

Wow, I'm envious. I barely can get through a whole book most of the time. My goal this year is to try and read more. I've been working on The Golden Compass and I just picked up a copy of Inkheart by Cornelia Funke. My friend just read Oprah's new bookclub pick The Pillars of the earth by Ken Follett and couldn't put it down until she had finished it.
Happy reading.