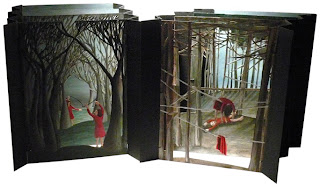 I wrote in this blog about Andrea Dezsö a year-and-a-half ago. I began with "How smitten am I with Andrea Dezsö?" Well, I'm even more smitten now. When I found out that Andrea was teaching at the Southeast Association for Book Arts (SABA) conference, a scant two-and-a-half-hour-drive away, I signed up immediately. I didn't even read the description of the class.

As it turned out, the two-day class covered tunnel books on day 1 and pop-up books on day 2. Andrea, whose regular day job is at Parsons New School for Design (you can see her work here on Parson's site -- including her pop-up and tunnel books), kept things simple. She doesn't believe in showing students how to replicate one of her books; she prefers to teach them the form and let them experiment with their own ideas. During our class, Andrea was available to guide, demonstrate, and answer questions, but made a point of not imposing her aesthetic on us.

She showed us two alternatives for a tunnel book: the first was the more traditional accordion style; the other is a, simpler, wrap-around format. In the latter, each individual "screen," or portion, of the tunnel book has side tabs that are are affixed to a long strip of the same material. The strip "wraps" around the sides and back of the book. You can see some of the work our class created at the end of this post. And I couldn't resist including some images of Andrea's tunnel and pop-up books.

This is the first time I'd attended the SABA conference, which is organized by the Art Department at the University of South Carolina in Columbia, and held there for four days every two years. The organizers are a mix of members of the Art and English departments at USC, and they did a terrific job. Each day began with a presentation from one of the instructors, and lunch included a lecture or workshop by someone from the school -- for example, the head of the university's rare books collections spoke on what book artists can learn from such a collection's resources. A national exhibit of artists' books, Intimate Curiosities, was mounted in conjunction with the conference, juried by artist Bea Nettles (Bea also took Andrea's class) and the opening of the exhibit was held at the University's McMaster Gallery during the first evening of the conference. Magnolia trees were in full bloom in Columbia during our visit, and Andrea, who'd never seen the flowers, was immediately captivated, saying that they were "as big as a person's head!" (As a side note, she made some beautiful sketches, including of the flower and its striking seed pod, during class).

I was delighted with the entire experience: with the professional and still friendly way in which the conference was run, with the organizers and speakers from USC, with the exhibit, with my fellow students, and of course, with the program and the instructors (and a good word, too, for The Inn at USC, which gave us great rates, and cookies and milk every night). I'm only sorry that it comes around only once every two years.

If you'll be in New York City between October 2009 and January 2010, check out the Museum of Art & Design's show: Slash: Paper Under the Knife, an international exhibit that will include Andrea's work.

(Note: the image at top right is Andrea Dezsö's tunnel book: Living Inside: The Forest. Andrea mentioned that this book was stolen from a gallery in April 2008. If you learn its whereabouts, please contact Andrea via her "Contact" link at Parsons.) 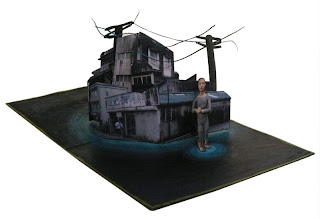 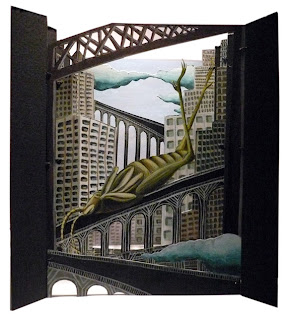 Magnolia bloom "as big as a person's head"

Andrea's sketch of the magnolia bloom
Posted by Clara at 10:54 AM 9 comments:

Email ThisBlogThis!Share to TwitterShare to FacebookShare to Pinterest
Labels: Andrea Deszö, class, SABA, Southeast Association for Book Arts
Newer Posts Older Posts Home
Subscribe to: Posts (Atom)
Please do not use or reproduce text or any original images from this blog without my consent.