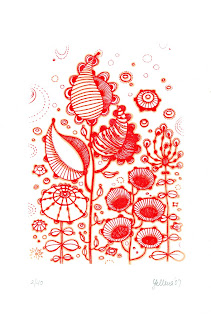 I bought a Gocco (from a Japanese word loosely translated as "make-believe play") more than a year ago, and I've yet to use it. Mind you, when I learned that the manufacturer was going to stop making Gocco and shipping supplies to the U.S. in December 2008 (see here and here), I stocked up on inks, screens, and bulbs in a panic. But, nooooo, that didn't motivate me to actually use my Gocco. The Gocco and the supplies still sit on my shelf, untouched.

I don't know about you, but I'm pretty visual when it comes to learning how to make something. But I also need to hear the instructions -- for some reason, visuals without words don't seem to take -- so the best combination for me is both hearing the instructions and seeing the action.

So I was delighted when I came across this video (below) from Etsy Labs on YouTube. Not only does it promise that Gocco printing is insanely simple, but it shows this to be really, truly so. So for all of you who have been procrastinating about making Gocco prints (to use in your books, natch), you have no excuse now (I'm saying that to myself as well as to you). Get out your Gocco and print!

P.S. Here are some FAQs about Gocco, should you want to learn more. And for inspiration, the beautiful Gocco print shown above is by Yellena, who has some gocco prints among the work for sale in her Etsy shop. And here's a gorgeous multi-color Gocco print from nebo peklo and some lovely work from Two Guitars, including these cards: 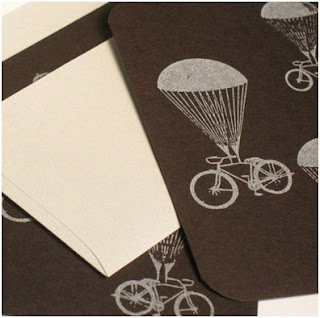 Gocco Printing From Etsy Labs
Posted by Clara at 11:11 AM 10 comments:

This is a wonderful short video based on the recordings of Alan Watts (1915-1973), produced by Trey Parker and Matt Stone, the creators of South Park. Watts was a British philosopher and writer. He was well known for his writings and lectures on Eastern philosophy and religion and the nature of reality. I initially read his work years ago, when it seemed everyone was enamored of all things "Zen." His words, which then had the air of fashion, are now simply real and true. Here, Watts talks about likening our lives to music, that is, savoring the journey.

(Parker and Stone have produced several videos based on Watts' recordings, including Prickles & Goo, based on names Watts assigned to personality types. For Gumby aficionados, this is where Gumby creator Art Clokey got the names for Gumby's pals -- Clokey was Watts' lifelong friend).
Music and Life
Posted by Clara at 10:08 AM No comments: 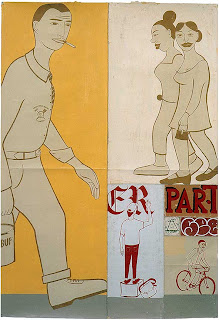 The late Margaret Kilgallen was a central figure in the San Francisco Bay area street art movement. She was influenced by American folk art, hand-painted signs, typography, and symbology. I was first drawn to her because of her dynamic images and lettering, and only recently learned that she was a bookbinder and had been a book conservator at the San Francisco Public Library. In addition to her mural work, Kilgallen also worked on found paper -- including discarded book endpapers, -- reflecting, it seems, her book arts background.

The first season of the PBS documentary series Art:21 profiled Kilgallen, and had this to say about her:

"Early experiences as a librarian and bookbinder contribute to her encyclopedic knowledge of signs drawn from American folk tradition, printmaking, and letterpress. Painting directly on the wall, Kilgallen creates room-size murals that recall a time when personal craft and handmade signs were the dominant aesthetic. Strong, independent women walking, surfing, fighting, and biking feature prominently in the artist’s compositions. Her work has been shown at Deitch Projects and the Drawing Room in New York, Yerba Buena Center for the Arts and the Luggage Store in San Francisco, the Forum for Contemporary Art in St. Louis, and the Institute of Contemporary Art in Boston. Kilgallen’s work was recently presented at the UCLA/Armand Hammer Museum. She died in June 2001 in San Francisco, where she lived with her husband, Barry McGee."*

In the Art:21 documentary Kilgallen says:

"I like things that are handmade and I like to see people's hand in the world, anywhere in the world; it doesn't matter to me where it is. And in my own work, I do everything by hand. I don't project or use anything mechanical, because even though I do spend a lot of time trying to perfect my line work and my hand, my hand will always be imperfect because it's human. And I think it's the part that's off that's interesting, that even if I'm doing really big letters and I spend a lot of time going over the line and over the line and trying to make it straight, I'll never be able to make it straight. From a distance it might look straight, but when you get close up, you can always see the line waver. And I think that's where the beauty is."

This snippet of the documentary shows Kilgallen working,; she also talks about her influences.


You can read the Art:21 interview with Kilgallen here, and see images of Kilgallen's work on Flickr here.

*sadly, Kilgallen died at 33, of complications from breast cancer, three weeks after the birth of her daughter.

Email ThisBlogThis!Share to TwitterShare to FacebookShare to Pinterest
Labels: Margaret Kilgallen
Newer Posts Older Posts Home
Subscribe to: Posts (Atom)
Please do not use or reproduce text or any original images from this blog without my consent.